Pressure drop-off? Wijnaldum exit? Identifying Liverpool's problems and how Klopp can fix them

Nobody will have been as grateful for the September postponements as Liverpool, a club in desperate need of a break following a near-disastrous start to the 2022/23 season that has provoked pessimistic onlookers into wondering if the Jurgen Klopp era has reached its end. It may be premature for such talk, especially considering how Liverpool roared back last year after a fallow 2020/21, but then again he left a collapsed Borussia Dortmund after seven years. His seven-year anniversary at Liverpool is in three weeks’ time.

There are some similarities to the downturn at Dortmund, namely in a general dissolution of the core tactical principles and a sense of draining energy, but even from a tactical standpoint – never mind a financial and cultural one – there are too many differences to closely compare the eras. Of greater significance is that similar spell in 2020/21, the year Liverpool were beaten 7-2 by Aston Villa and looked set for a mid-table finish before a surge in the spring of the campaign.

As was the case two years ago, the biggest concern for Liverpool has been injuries. Thankfully these are starting to clear up now and the one-month break without Premier League football should give Klopp the opportunity for a reset physically and psychologically. It is also time take stock of what has gone wrong and how he can fix it:

Liverpool’s attacking metrics show they are not struggling to create chances or to put them away; per FBRef their shot-creating actions are 28.67 per 90 this season, unchanged from the 28.74 last season and still second in the Premier League behind Manchester City. We find this trend across all manner of attacking numbers, while the eye test confirms the same, with Luis Diaz still performing well as Robreto Firmino and Diogo Jota pick up some of the slack from a poor, but not out of the ordinary, few weeks for Mohamed Salah.

However, there is clearly something wrong with the rhythm of how the forwards are interacting, and indeed too often this season the front three seem spread overly wide, struggling to connect with one another as the full-backs choose to under-lap rather than overlap, creating quite a dramatic difference in the tactical style of Liverpool’s play in the final third. But this requires only a minor tweak – more on that later. 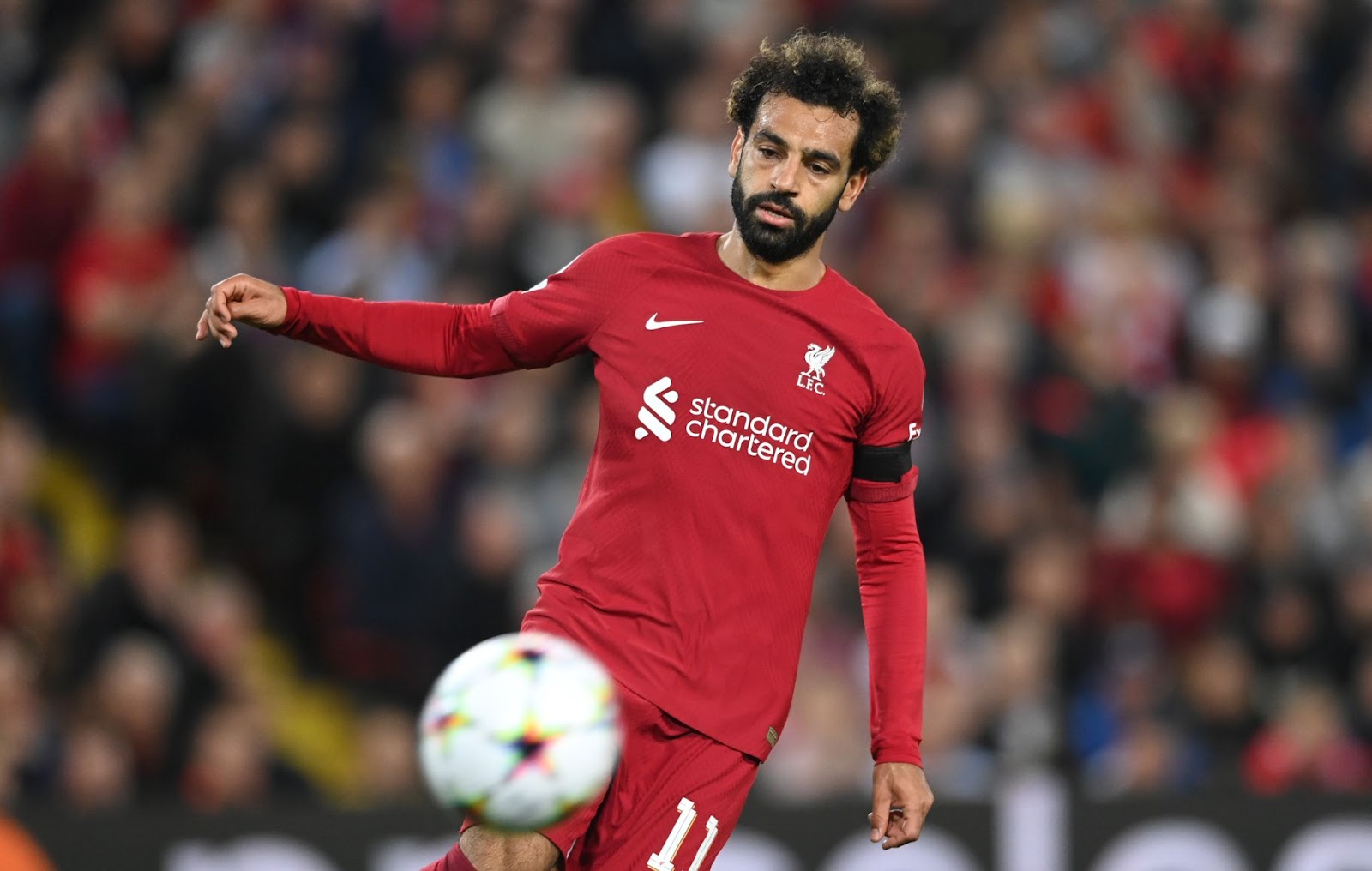 Salah has struggled to hit top gear this season

The bigger issue is how Liverpool are struggling to control matches through central midfield. Fulham, Crystal Palace, Newcastle United, and Everton have all managed to counter-attack far too easily in the dribble, while Napoli tore Liverpool apart in what proved to be the nadir. Some critics have been blaming Liverpool’s high line – which has looked increasingly exposed – or the poor form of Virgil van Dijk in particular, but these are in fact symptoms of the problem, not causes.

Liverpool’s pressing has dropped off; last season they ranked first in the Premier League for number of pressures in the final third per 90 (44.8), but this year they are in eighth (32.8). They are no longer hounding down the opponents in packs or managing to squeeze the pitch, instead half-heartedly doing so in ones and twos.

This decompresses their lines, creating gaps between the players in which the opponent can counter, and also means the opponent has time to look up and make that pass over the high defence. In short, the whole system falls apart unless there is constant pressing to deny the opposition the physical or mental capacity to exploit the vulnerabilities of such an attacking system.

Even this could be seen as a symptom of the most immediate problem, which is that Liverpool simply lack a world-class box-to-box midfielder who can keep control of games. Ever since Georginio Wijnaldum left this has been a problem: Klopp needs a metronomic presence who sweeps up second balls and keeps things ticking, playing clever passes under pressure and generally ensuring Liverpool dominate possession while maintaining their compressed structure. 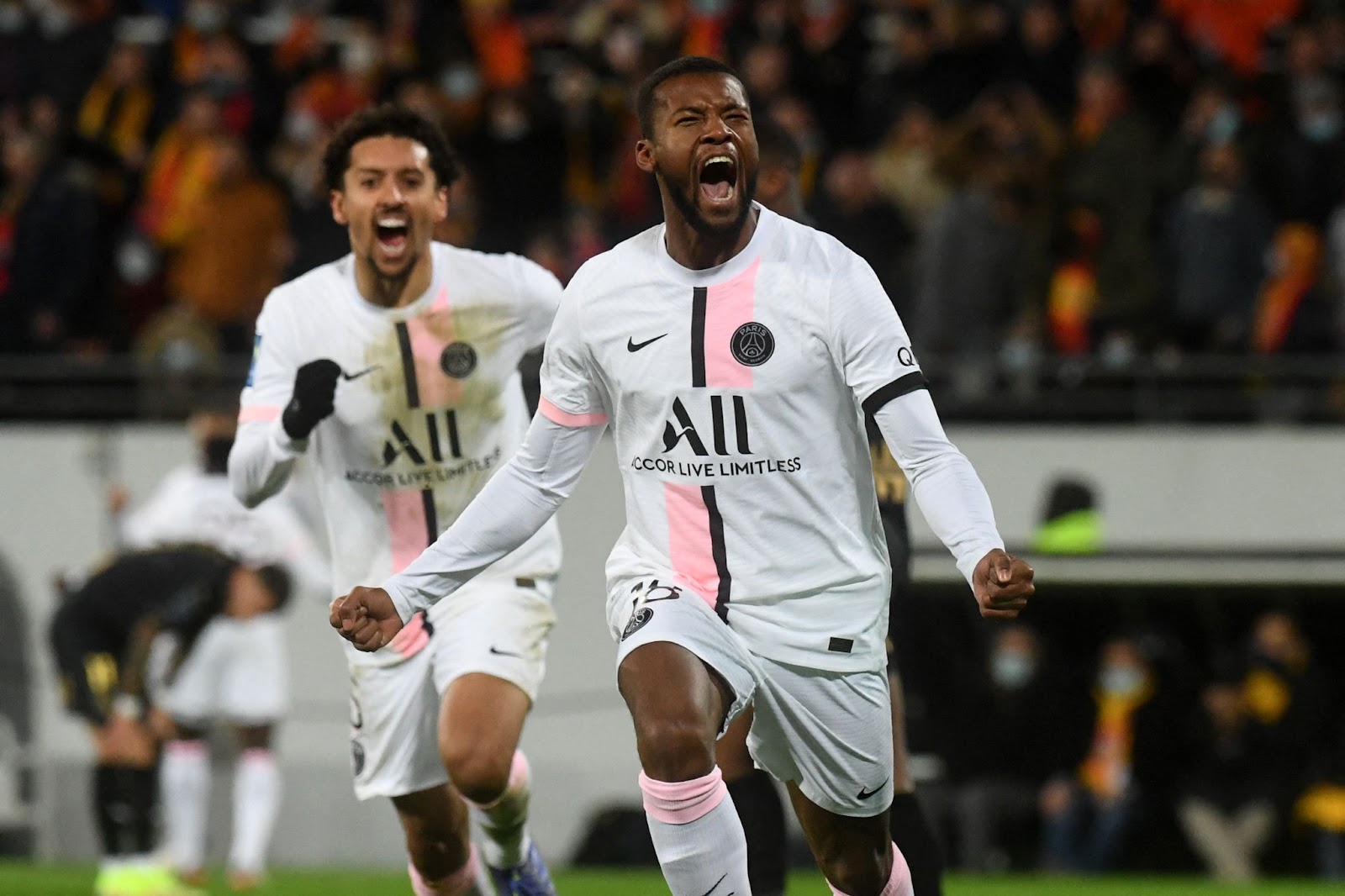 Liverpool have missed Wijnaldum since his move to PSG

Thiago Alcantara can do this and Liverpool perform better when he is on the pitch, but injuries mean he cannot be relied upon, plus Klopp requires a more agile and dynamic player to control the tempo higher up the pitch. If Liverpool still had that kind of control, they would have to press in fewer bursts and with greater support around them, plus their high line wouldn’t be tested as much and the opponent would be gradually worn down – collapsing into themselves after waves of attacking pressure take their toll on their capacity to defend or launch counter-attacks.

How to fix the problems

Klopp is clearly aware of all of these issues, and it would seem his main method to deal with less control in midfield has been to place Trent Alexander-Arnold and Andrew Robertson into narrower, supportive positions. However, this has the knock-on effect of meaning the forwards have to hug the touchline, creating the disjointedness that led to the 0-0 draw with Everton and 1-1 draw with Palace.

But already a fix is on its way. The 2-1 victory over Ajax in midweek may well be a turning point in that Liverpool looked sharper in all areas, but more specifically because the front three were once again narrow – joined together by Diogo Jota in a new-look forward line – as the full-backs moved back into their wider zones.

Liverpool had looked fluid in the 9-0 win over Bournemouth and, to a lesser extent, the 2-1 win over Newcastle with Roberto Firmino as the nine, before a return to the stodginess when Nunez played against Everton. The lesson taught by Firmino and Jota is that Liverpool need a false nine to draw the play inwards and re-link the front three following the departure of Sadio Mane. It is a pretty awkward lesson, too, considering the fee paid for Nunez.

The reconfigured attack against Ajax was an important first step, as was, unsurprisingly, the return of the Fabinho-Thiago midfield. There is really no way around the most basic issue for Liverpool: they need these two playing or else the entire system falls down, because none of Fabio Carvalho, Jordan Henderson, or James Milner are good enough to be that metronomic, pressing, loose-ball-winning midfielder the team craves. Harvey Elliot is a star in the making, but he needs two anchors alongside him. There is a reason why Klopp’s Liverpool at their best had such a workmanlike midfield.

Liverpool have started six different midfield combination in their first eight matches of the season, while Nunez, Jota, and Firmino have been overly-rotated, too. Before he has a chance to finally sign a Wijnaldum replacement in the January window, what Klopp needs most is to pick a consistent team; one that can draw the forwards narrow, re-compress the lines with pressing, and control contests through central midfield.