Just give it to him: Why handing Ferguson Everton job can break crisis

COMMENT: A message to those inside Everton: Why rush? Why panic? Is there any practical reason to have the new manager in place asap? And why the global search? Why go down the same broken road again when the best solution could already be in place…?

Again, for the board. Just step back. Breathe. Or in the local vernacular: Just calm down, will ya… the answer needn’t be another blind throw at the dart board. You’ve hired from outside the country. You’ve hired from inside the country. You’ve bought out contracts. You’ve taken on free agents. You’ve gone for big names. For up-and-comers. For the practical. For the stylish. And yet for all that, the results have been the same…

So why not do something different? Why not go for the local. The legend. The man you already have in place as caretaker…? Duncan Ferguson.

Give Ferguson the job to June. Tell him it’s his to lose. Tell the players the same. Then let him get on with it.

For those in charge of the biscuit tin, extending the Scot’s brief to season’s end should make sense. He’s already contracted. His staff are in place. There’s no compensation fee. No outlay to rebuild another backroom team. It’s all there, ready to go.

For those on the more romantic, emotional side of the board, supporting Ferguson should be an easy decision. The club needs unity. Indeed, the board and the support need to find unity. To rediscover a connection. Ferguson can be that bridge. Certainly the players will be behind him, just consider the words of Jordan Pickford ahead of Saturday’s early kickoff against Steven Gerrard’s Aston Villa.

“You could see the difference Duncan made last time,” said England’s No1. “He is such a legend of the club, it was a perfect fit and performances were really good.

“Training has been brilliant, everyone respects him and he is the ideal person to lead us out on Saturday. The respect the players have for him, we will work our socks off for him and do everything he wants on the pitch.” 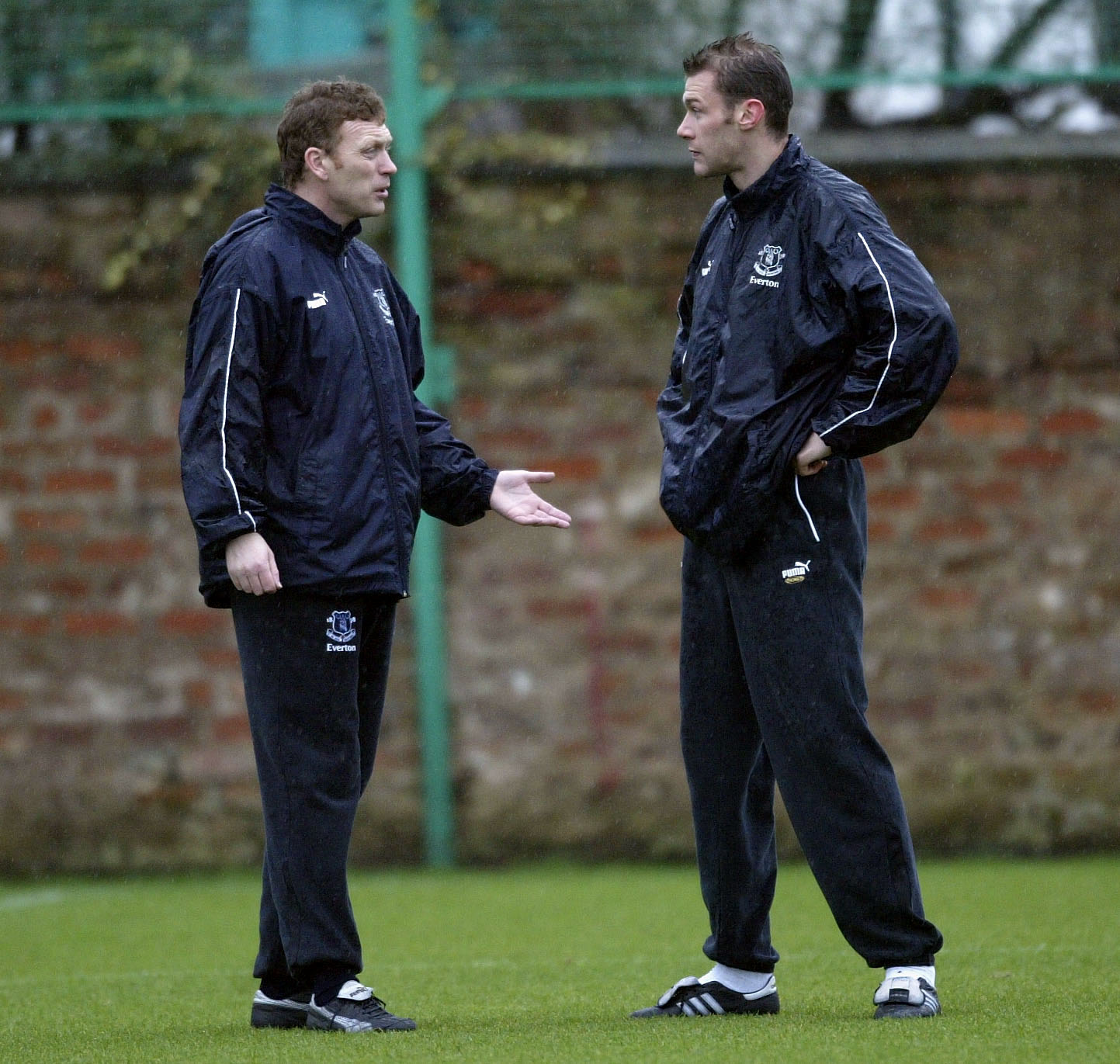 Moyes and Ferguson together in 2003

The players want to play for Ferguson. They want to win for him. Why must it be for a one-off game against Villa? Why not extend that sentiment to June – and beyond?

The board must know Ferguson’s ambitions. They must know the Scot has plans of his own. To go out and manage himself. To be the one making the calls. Leading the team. If the long-term plan has been to eventually have Dunc as manager, why let him skip away and allow another club to benefit from seven years on the senior coaching staff at Finch Farm?

Yeah, it’s a gamble. But Farhad Moshiri must know by now every managerial appointment is a gamble. There’s no sure thing in this industry. Certainly there’s been no sure thing for Moshiri’s Everton. The answer, his one chance of breaking this run, is staring him in the face.

It can be a new, fresh start for Everton and this Moshiri era. Rafa Benitez managed to engineer Marcel Brands’ departure before the Spaniard was forced out himself. Gretar Steinsson, the club’s former head of recruitment, and scouting manager Dan Purdy also followed Brands out the door. The upheaval behind the scenes cannot be underestimated. Even if Moshiri and co were to hire from outside again, what would the new man be walking into? And beyond Zinedine Zidane, it’s doubtful any name, whether local or foreign, would generate from the support the unity Everton so desperately needs.

The sacking of Benitez was fan-driven. Injuries. Financial Fair Play. The staff clearout. Beyond his Anfield ties, there’s a myriad of reasons why the Rafa gamble didn’t work. But the biggest influence was the support and the deteriorating relationship between them, the manager and the board.

And if listening to the fans forced Moshiri into action on Sunday, then the same should be good enough when deciding on Benitez’s successor.

Ferguson will face Steven Gerrard on Saturday. A Steven Gerrard who had just the one season of coaching behind him – with Liverpool’s U18s – before Rangers rolled the dice on him. In contrast, as mentioned, Ferguson has been working alongside the likes of Carlo Ancelotti, Ronald Koeman and Roberto Martinez for over six years.

And again for the romantic, it was the Scot who initiated that first conversation about coaching at Finch Farm. Ferguson, now over ten years ago, calling David Moyes about some volunteer work inside the Blues academy. No airs. No graces. Just a love for the club and wanting to help. Which is what he’s doing now.

As a league campaign, Everton’s season is over. The best they can now shoot for is a top ten finish. Of course, there’s an FA Cup run to tackle, but in terms of expectations, of European places, that’s now fantasy calcio.

So the message to the board must be: Why rush? Why panic? Give Ferguson the job to June and let him show you what he can do.