Manchester City are gaining ground on Arsenal just as the Premier League leaders appear to have hit a wall. However,
Tribalfootbal.com’s tactical expert Alex Keble argues not all is as it seems at the defending champions this season…

It wasn’t just that Arsenal dropped points at Southampton Sunday. It’s that they looked exhausted doing so. Mikel Arteta’s decision to play so many of his first-choice players in the Europa League backfired as his team huffed and puffed through a low-quality second half at St. Mary’s in what was a worrying sign for their potential title challenge; this unique, World Cup-interrupted campaign is going to be the most tiring in Premier League history.

And Manchester City are the most formidable opponents in Premier League history, or at least that is the most obvious conclusion to draw from Pep Guardiola adding Erling Haaland to a team that have won more than 95 points in four of the past five seasons. Haaland’s record of 17 goals in 11 games has made a lot of people worried that Man City will win the division by a huge distance and, perhaps, do to the Premier League what Bayern Munich and Paris Saint-Germain have done in Germany and France.

Not many people think Arsenal can do it, then, certainly not after such a meek performance at the weekend allowed Southampton to take a point despite not playing particularly well. But this simple read of the Haaland situation, and of Man City’s start to the campaign, misses some crucial caveats that can help us to reframe the 2022/23 title race. Things might not be as rosy as they seem for Guardiola and Man City.

For starters, they have enjoyed unusual good fortune with the fixture list. Heading into the game against Liverpool two weekends ago, City’s opening nine Premier League matches had included playing five of the then bottom six, and their only recorded wins outside that group had been beating Bournemouth (now sinking fast) 4-0 at home, Manchester United 6-3, and West Ham 2-0 in a game defined by a truly abysmal showing from David Moyes’s side. After losing 1-0 to Liverpool, Man City then faced a Brighton team at the Etihad that was winless since Graham Potter’s departure.

Man City have scarcely been tested at all this season, and much bigger challenges lie ahead. They still have eight of their ten ‘Big Six’ fixtures left to play, and are highly unlikely to remain lucky in facing others when they are at a their lowest. Naturally, Man City can only play what’s in front of them and this alone is not reason Arsenal fans should be optimistic, but it does gives us the platform to question whether there are flaws in the Man City setup that will be exposed at a later date.

Haaland’s presence may yet be the catalyst for an Arsenal challenge, as improbable as that sounds. Guardiola has radically altered Man City’s tactical direction this season, both on and off the ball, thanks to his introduction of a non-pressing and non-linking centre forward, mixed with his decision to let Gabriel Jesus, Raheem Sterling, and Oleksandr Zinchenko leave the club. In order to accommodate Haaland, Guardiola has had to change City’s shape in possession and accept a less coherent pressing structure.

In most matches, Guardiola now deploys his full-backs infield to join Rodri in central midfield and instructs Ilkay Gundogan and Kevin de Bruyne to push higher up; a dramatic reconfiguration that hasn’t received enough media attention. The idea is to create a wall against the opposition counter-attack, itself made more likely without Haaland leading the counter-press; to put Gondogan and De Bruyne in positions to press from the front, moving ahead of Haaland; and getting two midfielders closer to the Norwegian, who won’t drop to meet them half way.

The formation change is having an impact in an attacking and defensive sense.

Starting with the defensive side, it is striking that Man City’s possession average has dropped slightly from 68.5% last season to 66.1% and yet their average number of pressures per game has gone down from 111.9 to 99.2 according to FBRef. We saw Newcastle United, Crystal Palace, Manchester United, and Liverpool all find surprising amounts of space between the lines, finding the time to look up and pick passes where once they were furiously pressed into conceding possession. What’s more, their PPDA has risen from 10.1 to 12.4.

On the ball, the new system has made Man City more direct and more focused on attacking through the central column of the pitch. Their ‘medium’ length passes are up from 278.0 to 296.1 per game this season, per FBRef, reflecting the slightly more stretched shape of the team, while Opta’s measure of ‘zones of control’ (using a team’s percentage of the total touches in that area to determine who controls the space) had Man City controlling all-but one area outside the box last season. This year, there are five areas they are not controlling. 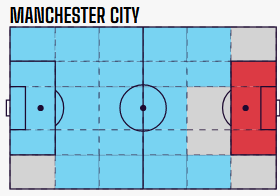 This has the potential to detach Man City from their free-flowing football, as we saw when Aston Villa drew 1-1 by packing central midfield with bodies in a diamond 4-4-2 formation. It is surprising that more teams have not done this, considering how high and central Man City’s eights are sitting to support Haaland.

None of these are major problems, of course, but there is enough evidence to suggest that more difficult times are ahead for Haaland and Man City. The World Cup, for example, could expose City’s weakened squad depth after the sale of key fringe players in the summer, while a general jadedness may not serve Man City well if there pressing is already slightly less ordered than it was in 2021/22.

That alone is enough to give Arsenal supporters some optimism, even if fatigue is currently a far bigger issue for their team than it is for Man City. The mid-season break will do strange and unpredictable things. Even if Man City are top of the table by the time the World Cup starts in Qatar there will be hope for Arsenal; hope that Haaland and Man City have breezed through the first few months but face tactical conundrums in 2023.