Chelsea top brass are failing Tuchel: Why they should learn from Barcelona

COMMENT: Fatigue? Form? Injuries? Whatever the reason, Chelsea’s campaign is threatening to go off the rails. And those upstairs are doing the manager no favours as he tries to get his arms around this crisis…

Did he speak too soon? Thomas Tuchel. Was the German a little too quick to put down the way former employers PSG ran their operation in contrast with his experience at Chelsea?

“PSG and Chelsea? These are two teams that are at the opposite end in terms of style and organisation,” declared Tuchel earlier this season. “In Paris, I worked more as a minister of sport than as a coach, also managing the family and friends of the stars. At Chelsea, on the other hand, I can work more calmly.”

Of course, there was some animus behind Tuchel’s comparison. The German still bristling over the way he was infamously sacked on Christmas Eve by the Parisians. But as he battles to snap this slump, Tuchel may look back at those comments with a tinge of regret.

As it stands. And just as every manager during the Roman Abramovich era discovered before him. Tuchel is it. He may not have to worry about family and friend issues amongst his squad. But in terms of communication. In terms of what matters to the support. He’s it. He’s the comms director. The club spokesman. He’s not just answering questions as manager. But also as a sporting director. As general manager. Even as president. As Chelsea hobble and lurch from game to game – it’s now nine points from the last possible 24. As the issues involving results, contracts, rows, sales and signings mount up. Tuchel is carrying it all on his shoulders. Just as those before him, there’s no-one at Chelsea willing or available to share the public burden.

Tuchel has found himself having to answer for why Marina Granovskaia hasn’t been able to convince Andreas Christensen and Toni Rudiger to pen new terms. Nor why his captain, Cesar Azpilicueta, is still waiting for an offer as his contract runs down.

It was the German who publicly managed the Romelu Lukaku blow-up on Italian television. Tuchel having to offer a reaction on behalf of himself, the club and the dressing room. And it’s the manager who is speaking on transfer policy. On loan policy. On who is kept and who is released. And that’s all in the middle of pre- and post-match pressers, which for the moment, have been the stuff of frustration and unwelcome results. 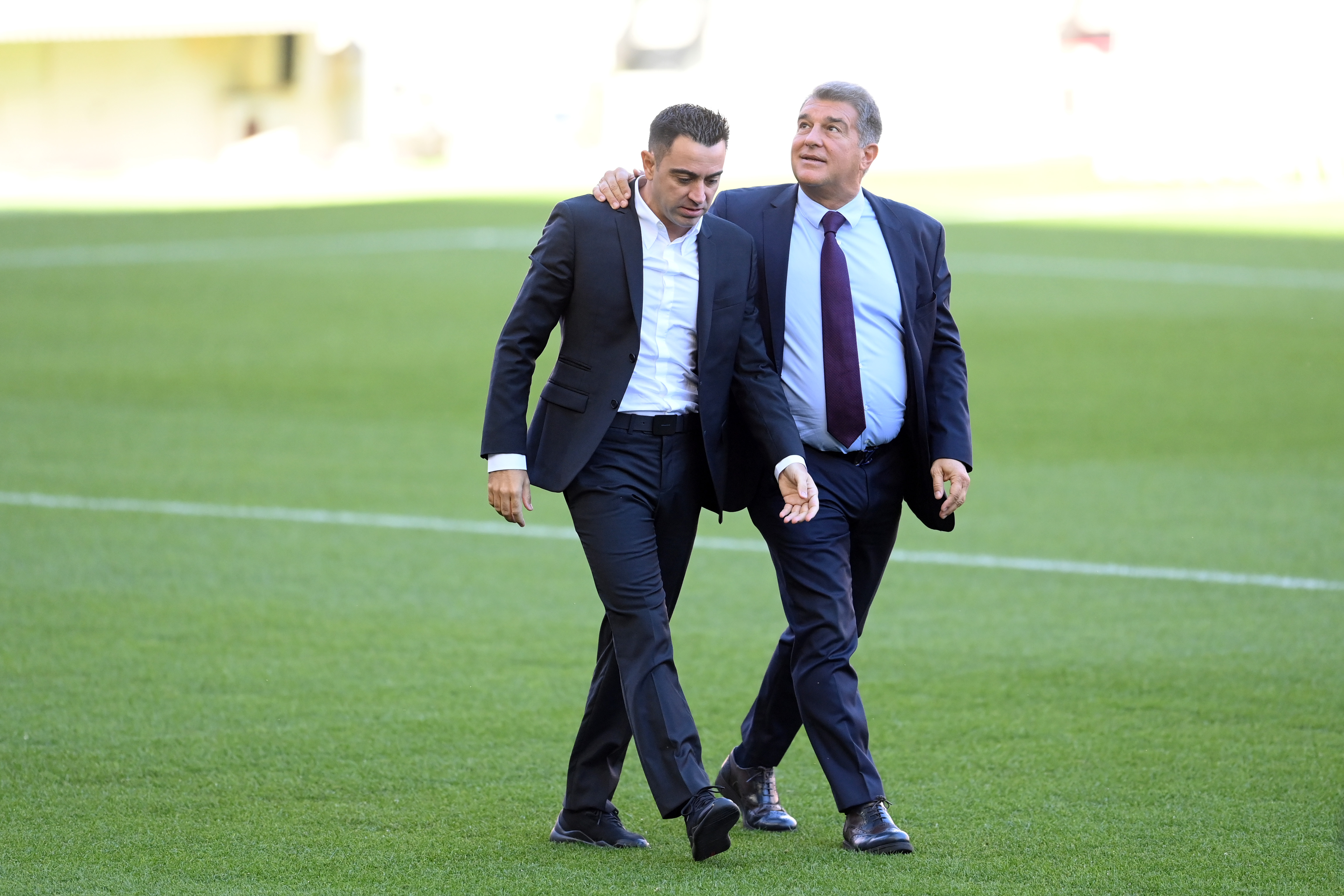 Xavi and Laporta together on the Nou Camp pitch

And there’s danger. A danger to Tuchel’s job. To his relationship with Granovskaia, the managing director. Even with the owner, Abramovich. One slip after a frustrating result. One misplaced quip after an unexpected question. And it could all be interpreted as a swipe at the board. A warning to Granovskaia. A dig at Abramovich. And with his team stumbling. With his pressers more animated. It can all begin to spiral very quickly.

Just consider Thursday’s events in Barcelona. It was dramatic. It was emotional. But it also came from a unified place. Mateu Alemany, Barca’s sporting director, taking the responsibility to announce that Ousmane Dembele, after his refusal to sign new terms, would be sold “before January 31”. Alemany’s comments arriving after coach Xavi had stated something similar the previous day. And before then, Joan Laporta, the club’s president, had also taken questions about the situation and expressed his frustration.

The burden of keeping the support informed wasn’t left to Xavi. Alemany’s bombshell on Thursday the third time he’d publicly addressed Dembele’s contract talks in the past two weeks. Indeed, he’d spoken more on the topic than Xavi, himself, so leaving the coach to take questions about on-field matters. The easing of such demands surely welcome as Barca’s recently appointed coach attempts to right the wrongs of the Ronald Koeman era.

Go to Italy and the support for the coach is even stronger. At AC Milan, for example, Stefano Pioli is free to speak on anything and everything involving the club. But he isn’t forced to. There’s Ricky Massara to talk transfers and scouting. Paolo Maldini to discuss players and refs. Even Ivan Gazidis, the chief exec, is available to comment on budgets and the owners. Again, Pioli isn’t burdened by such things. Of course, behind the scenes, he has as much input as anyone, but there’s no reason for a journalist to badger him on Franck Kessie’s contract status when a rival already has quotes from Maldini and Massara on the same issue.

But at Chelsea. As it always has been. Tuchel is having to speak on it all. In his first experience of Christmas football. As we come up to his first anniversary in charge. There is the threat of it overwhelming the manager.

And it wouldn’t be fair. Not on Tuchel. Not even on Chelsea. The club needs to give their manager every chance of succeeding. Especially in the hard times. Ease the spotlight. Share the burden. Take this comms lark off Tuchel’s shoulders so he can focus on what he was hired to do.

The German has been good for Chelsea. His football. His personality. His character. It’s all been a positive for the club. But those upstairs are doing the manager no favours by having him answer for them. Especially as this campaign threatens to derail.