The latest edition of the Africa Cup of Nations is underway, and some of the world’s best players are on show. Liverpool stars Mohamed Salah and Sadio Mane are leading the line for Egypt and Senegal respectively, while Manchester City creator Riyad Mahrez and Paris Saint-Germain wing-back Achraf Hakimi will be hoping to lead Algeria and Morocco to glory.

With the January transfer window also open, the tournament will act as a shop window of sorts for other players. Nigeria and Leicester City ball-winner Wilfred Ndidi will be one of those players. The 25-year-old is considered one of the finest defensive midfielders in the Premier League, and he has recently been linked to Manchester United and Real Madrid. Here we will analyse the player’s game and why the transfer rumours make so much sense.

Ndidi joined Leicester from Genk in the middle of the 2016-17 season. The previous year, the Foxes had won the title under the guidance of Claudio Ranieri, with N’Golo Kante at the heart of their success. Kante left for Chelsea at the end of the campaign, however, and it was Ndidi’s job to fill the void in midfield.

Five years on, and it’s safe to say he did a pretty good job. Managers have come and gone at Leicester, but Ndidi has remained integral to the team throughout changes in formation and style. Now, under Brendan Rodgers, he often plays in a double pivot next to Youri Tielemans. He is performing in the same dynamic at the Africa Cup of Nations (AFCON) for Nigeria, alongside Joe Aribo.

Ndidi is a positional midfielder. Very rarely does he venture too far away from the centre-backs, in or out of possession. When the team is attacking, he stays behind the ball virtually at all times, meaning he is always on hand to defend the opponent’s counter-attack. In Nigeria’s opening AFCON win over Egypt, this quality was consistently on show. Here, when Egypt try to break out from defence, Ndidi closes down the opponent, wins the ball, and Nigeria can go back on the attack. 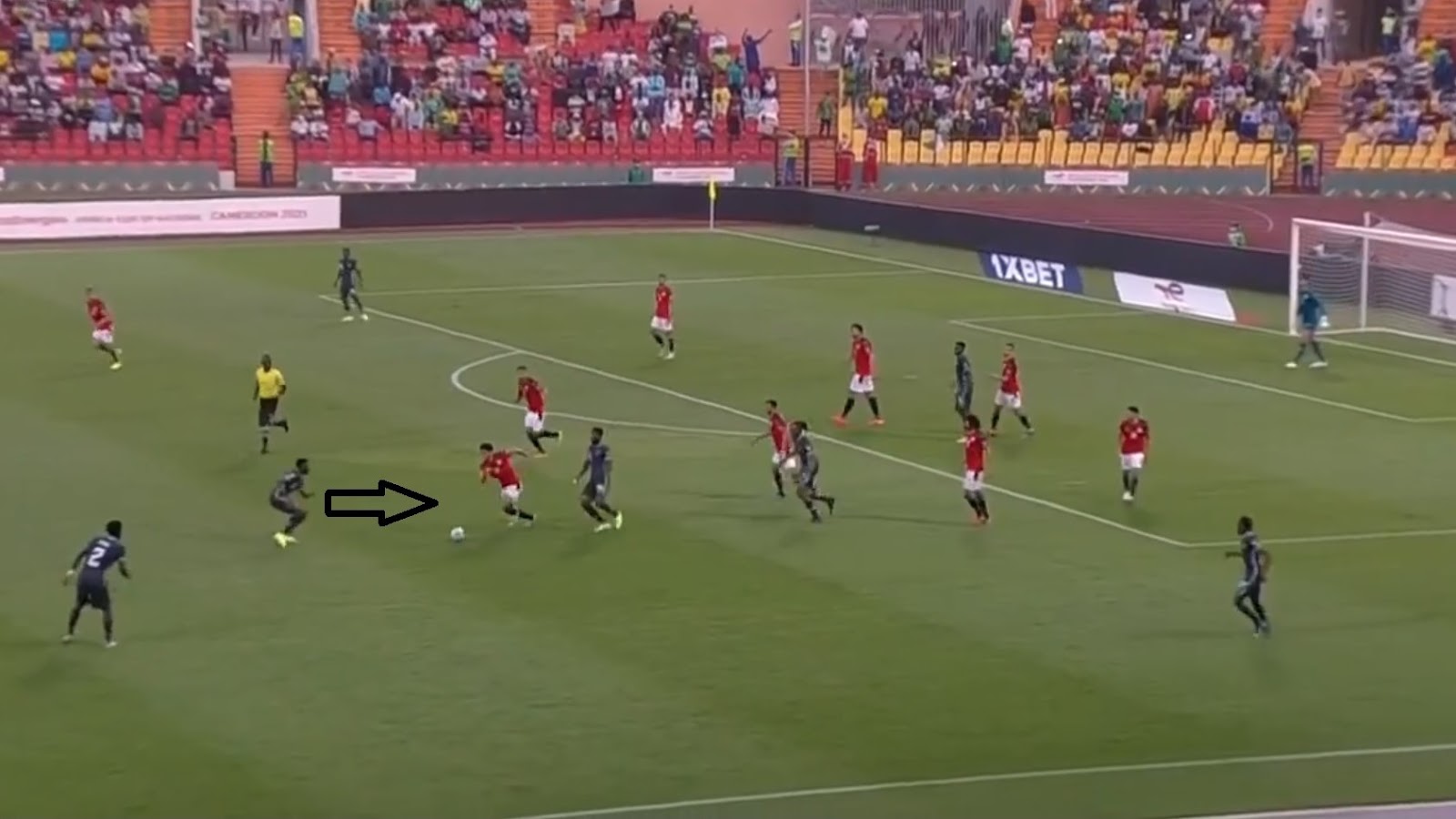 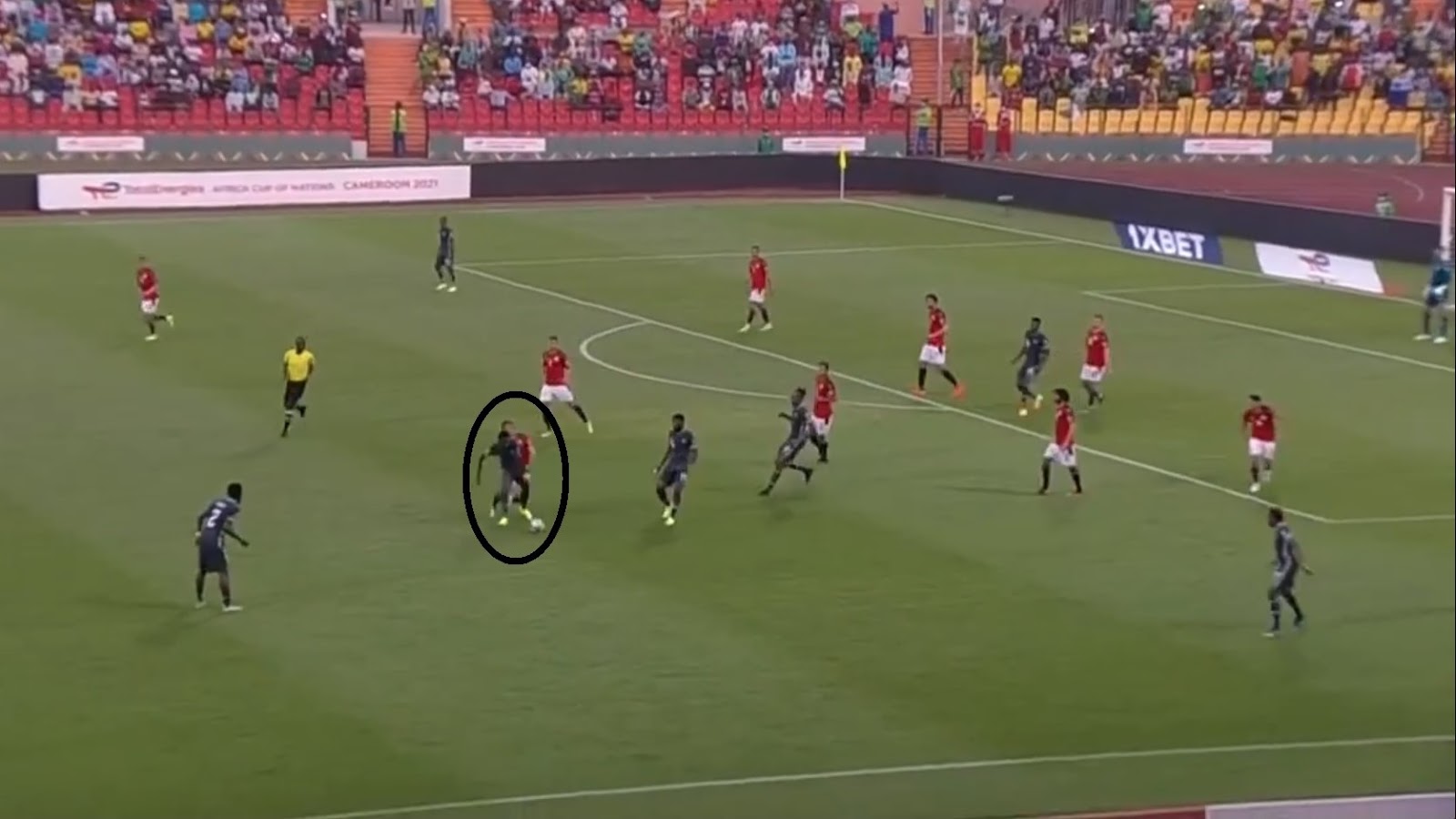 Nipping counters in the bud is one aspect of Ndidi’s defensive role that requires both anticipation and speed. These qualities can also be witnessed in organised defensive play, when his team doesn’t have the ball. He is a clever marker, one who fills in for the defenders when necessary and is able to cover two opponents at once. In the next sequence, we see an example – he positions himself to access both the back-pass and the pass inside, and can then close down accordingly. 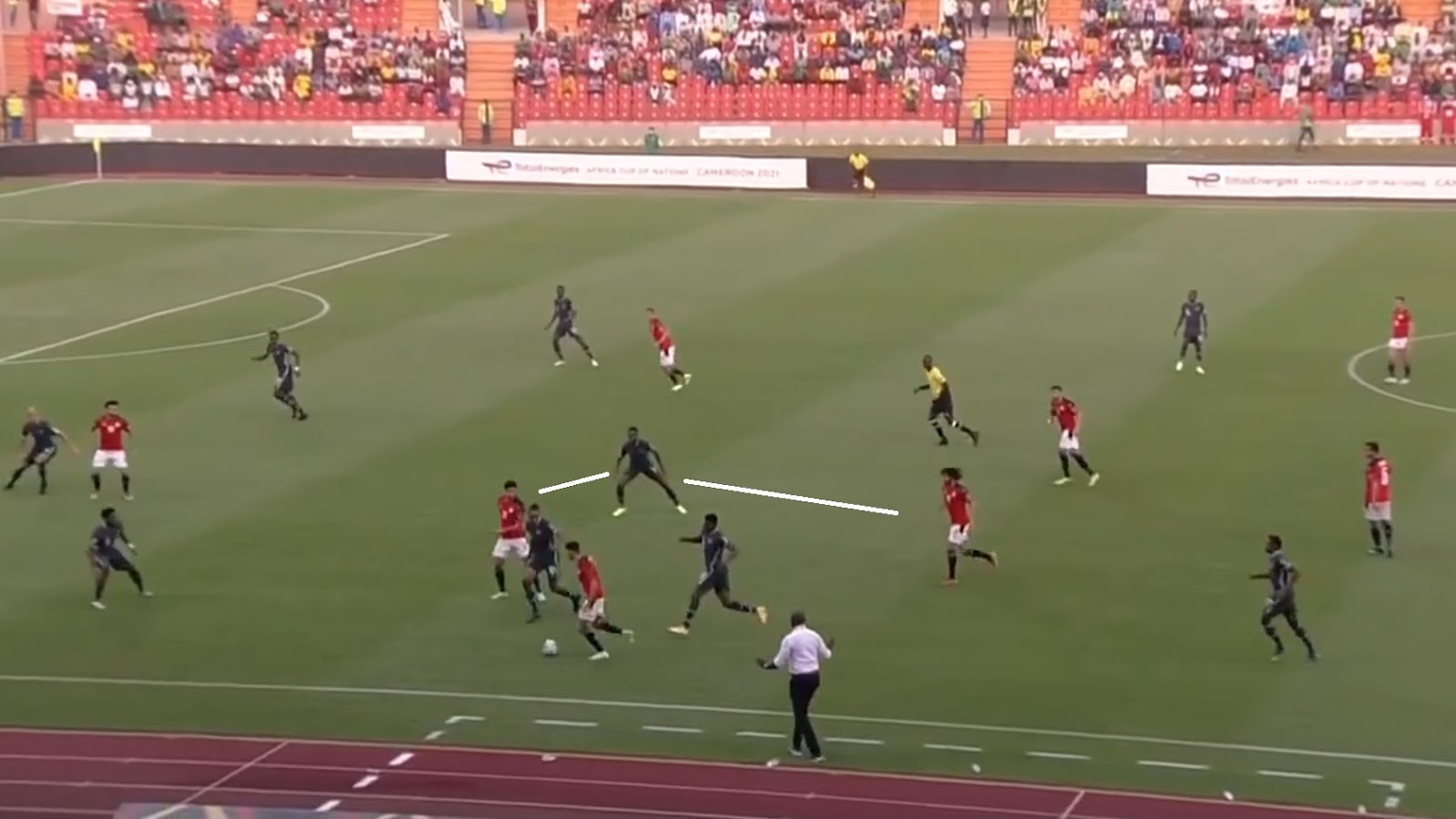 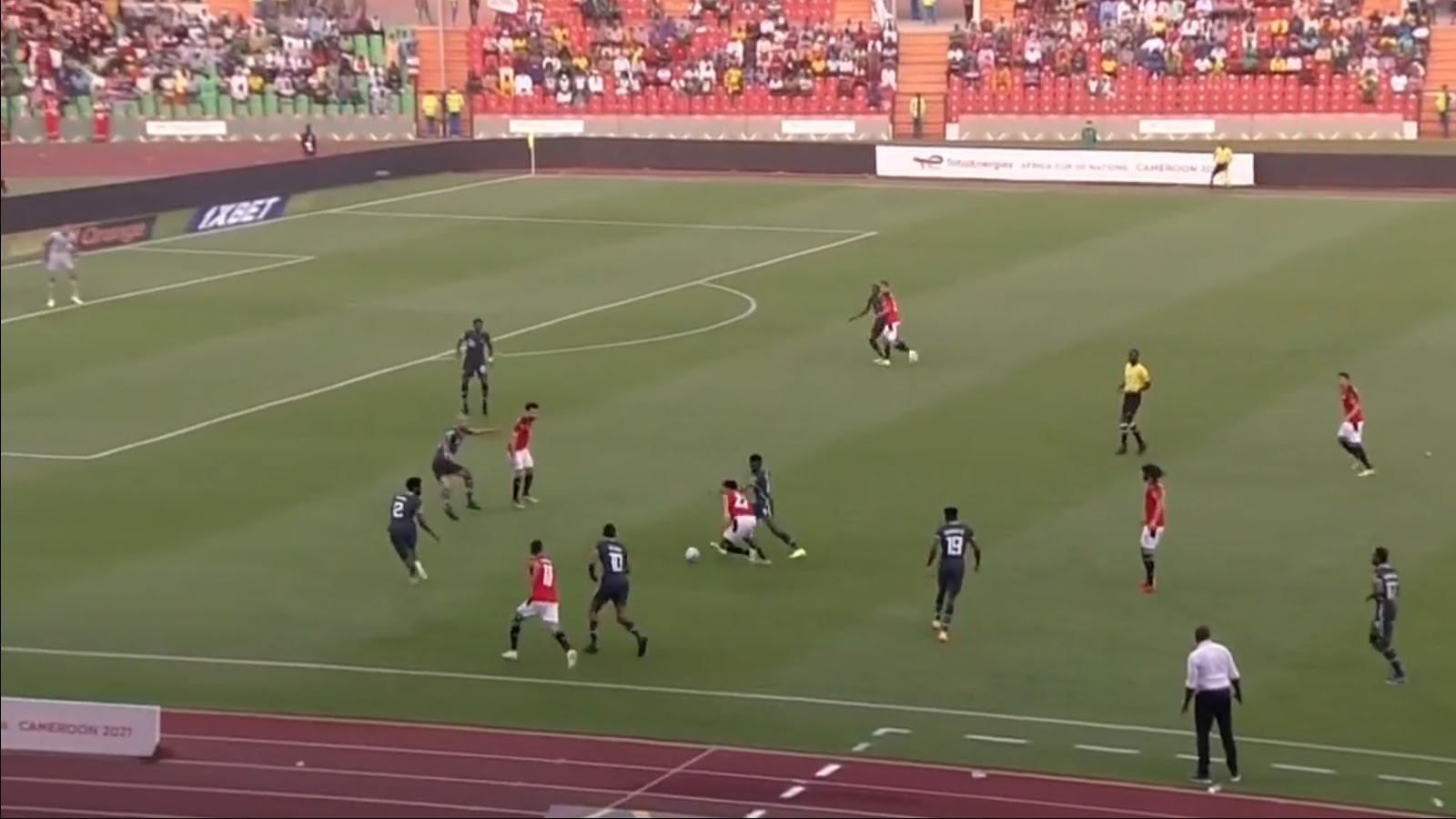 Standing at 6ft, Ndidi is reasonably tall and capable in the air, if not dominant. He is reasonably strong, with a wiry frame, is consistently able to get a foot in and wins a lot of his duels. According to WhoScored data, he is joint-top in the Premier League this season both for tackles and interceptions per 90 minutes. These numbers are primarily the consequence of his positioning, work rate, anticipation and speed to close down.

When his team is building play from the back, Ndidi stays in close proximity to the centre-backs. He doesn’t perform many changes of direction, pace or position to become available, so he isn’t desperate to get on the ball and make things happen, but he is always nearby and can be found within one or two passes.

Playmaking isn’t really Ndidi’s bag, and his passing is mostly short to the nearest man. At club level, Tielemans is the half of the double pivot expected to make things happen, while internationally Aribo is the more forward-thinking of Nigeria’s midfielders. As we see below, Ndidi will stay in front of the centre-backs but doesn’t necessarily show for the ball. Instead, the defenders do a lot of the ball progression with forward passes and diagonals to the wings. 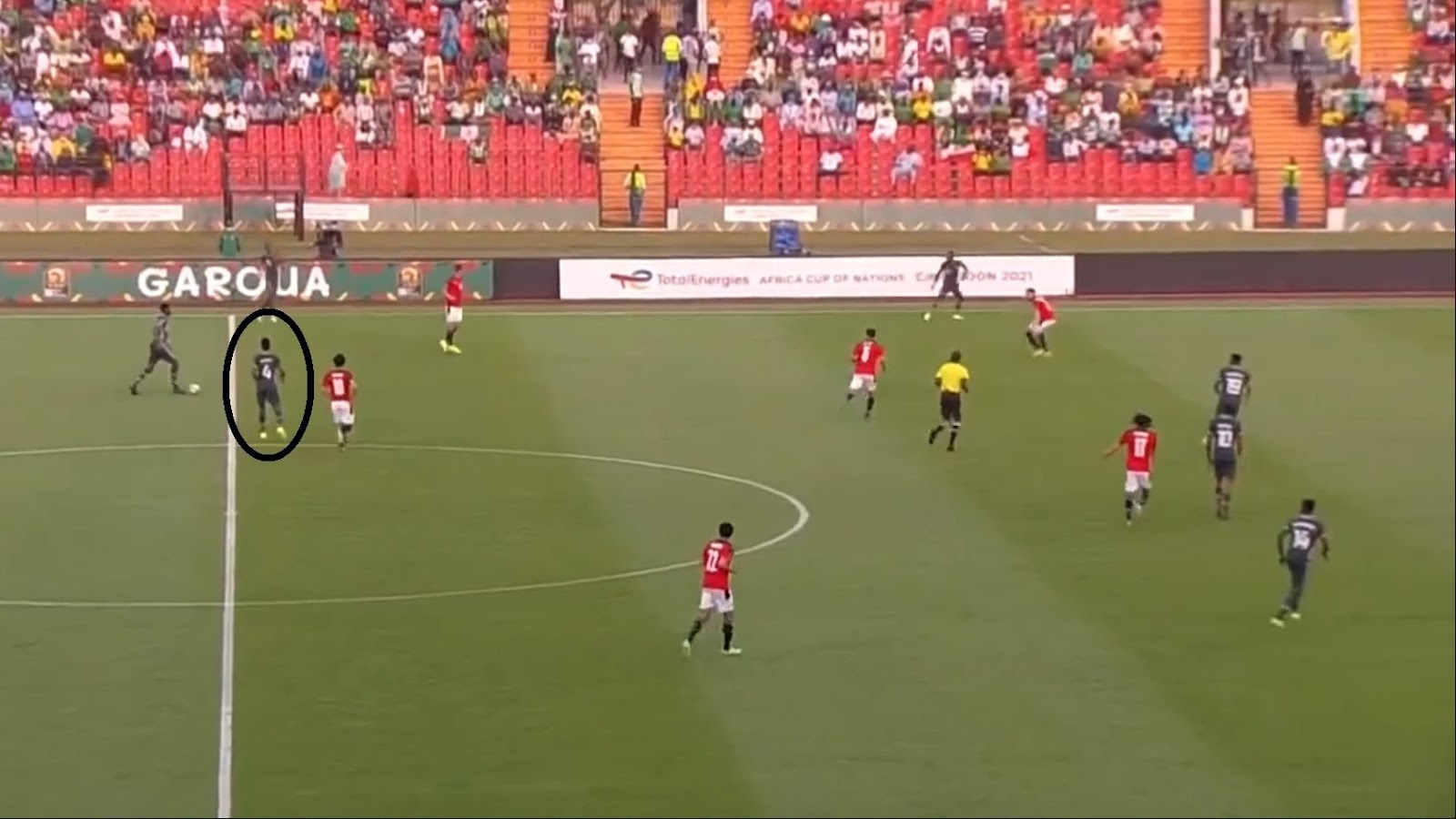 Ndidi keeps his passing simple, with a focus on retention. In Nigeria’s win over Egypt he played 54 passes at an accuracy rate of 85.2%, and at club level his pass accuracy this season is 80.3%. All of this is not to say he isn’t proficient on the ball.

His footwork under pressure is good, using drag-backs to get free of his marker and make space for himself when necessary. He also throws in the occasional searching, driven long ball to switch or play over the top. However, in his five years of Premier League football, Ndidi has recorded just seven goals and eight assists. Given he’s played over 150 games, that’s less than one goal or assist every 10 games.

Ndidi is a safety-first defensive midfielder. He anticipates problems, closes down well, and is effective in the tackle, while in possession he tends not to over-complicate matters and lets more creative players do the heavy lifting. It’s not spectacular to watch him play, and that’s perhaps why he has yet to earn a move to a top European club. However, he could be just what is needed.

Real Madrid will have to replace Casemiro, who soon will turn 30 years old, at some stage in the near future. Manchester United may need Ndidi even more, though, considering they still don’t boast one single top-level defensive midfielder. Behind Bruno Fernandes, Paul Pogba, Mason Greenwood et al there is a need for someone to protect the centre-backs, and Ndidi could be the man.

United have been linked with other players in this position, including West Ham United vice-captain Declan Rice, Marseille’s Boubacar Kamara and RB Leipzig’s Amadou Haidara. But there is no player on that list who can better Ndidi for Premier League experience or defensive nous.

Ndidi isn’t a one-man Band-Aid that Manchester United can stick on to mask team tactical issues, but he would solve the problematic defensive midfield position and, finally, help to bring balance to an attack-minded team.