Although Manchester City deserved their victory, Chelsea were somewhat unlucky to concede when they did; the timing of their goal undermined Thomas Tuchel’s tactical strategy to leave Chelsea looking too timid and defensive to be worthy of points. In truth, had they made a double substitution just moments earlier we could have been praising Tuchel for his Mourinho-esque approach.

The idea was to sit deeper than usual and invite Man City pressure before counter-attacking in behind. It might have looked passive to some, but it was a thought-out approach that relied upon keeping things tight for 70 minutes before going for the winner in the final 20. As Timo Werner and Callum Hudson-Odoi prepared to come on to take advantage of tiring Man City defenders with runs on the shoulder, things were just about going to plan for Tuchel.

But it unravelled because Kevin de Bruyne scored seconds before the change was made. From here, Pep Guardiola could instruct his players to sit a little deeper and negate the pace Chelsea had brought onto the pitch. Subbing on Ilkay Gundogan to play alongside Rodri helped keep City in control, and left Chelsea harshly criticised for being too negative.

Man City’s approach was deadly when it needed to be, and in overwhelming Chelsea in central midfield and out wide they showed that Tuchel’s 3-4-2-1 was the wrong system for this encounter – simply because it isn’t a very suitable formation when playing in a lower block and holding the minority of possession.

Centrally, N’Golo Kante and Mateo Kovacic both played well and yet were slowly suffocated by the fact Man City had three midfielders on the pitch and Phil Foden was dropping as a false nine to help. The four-on-two allowed Man City to gradually crank up the pressure. However, they were even more dominant in the wide areas thanks to Chelsea’s inside forwards Christian Pulisic and Hakim Ziyech failing to contribute enough defensively.

As Jack Grealish and Raheem Sterling held the width, Bernardo Silva or De Bruyne came wide to help create a two-on-one versus the Chelsea wing-back, who often had nobody to help them out. Cesar Azpilicueta or Marcus Alonso frequently had to rush out to meet a City player, in turn leaving space between themselves and the outside centre-back for Man City to then slide a pass into a dangerous area.

Joao Cancelo managed to take advantage of this repeatedly in the first half – before his incisive pass in a similar situation assisted De Bruyne’s winner. 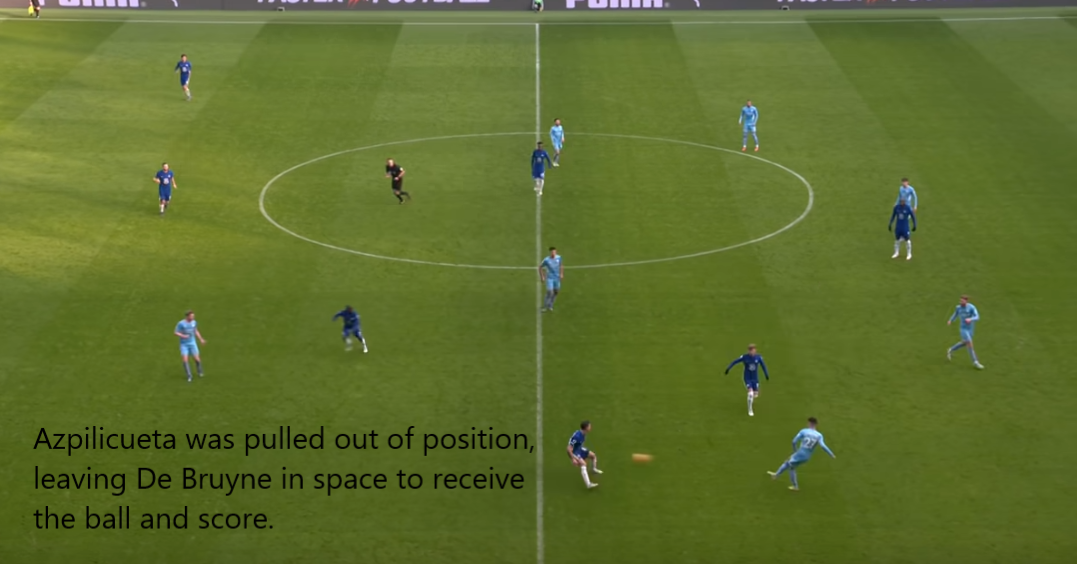 It was a dream debut for Philippe Coutinho at Villa Park and proof that he will fit in nicely at Aston Villa. Steven Gerrard’s Christmas Tree 4-3-2-1, with dual number tens staying high and narrow at all times, means Coutinho can always sit in his favourite position, whereas in recent seasons he has been shunted too far to the left by Barcelona or Bayern Munich.

But this match was just as much about the brilliance of Jacob Ramsey, a player excelling under fresh instruction from Gerrard to always look for the forward pass and to drive through the lines in the dribble – much like Gerrard the player. Ramsey’s run and assist for Coutinho’s equaliser was a sign of the confidence the new manager is instilling in the players.

Elsewhere, Lucas Digne settled nicely and should enjoy a good relationship with Coutinho. The 4-3-2-1 formation deliberately draws the opposition infield with those tens, in turn creating space for full-backs to pour forward unseen. Digne is a superb overlapper and crosser, and should make good use of those Jack Grealish-like dribbles from Coutinho in the left half-space.

The tactical pattern of this match was very easy to predict, and it went exactly as we might have expected – only for Watford to miss some golden opportunities to inflict greater misery on their hosts. Eddie Howe’s dreadful defensive record as Bournemouth manager is well documented and already we can see it become an issue at St. James Park, where Newcastle are highly vulnerable to the counter-attack.

No matter the situation or game state, the opposition only ever seems to be one slide pass away from getting in behind. That is what happens when the team is coached to play in such decompressed lines, pressing half-heartedly in ones and two, and hoping to attack without the necessary compactness. The top coaches all ensure they have defensive cover, and a way to stunt the counter-attack at source, if they are to play on the front foot.

There is no sign of Howe doing that, which is why Watford’s pacey forwards so often broke in behind the back line to cause problems. You could see it coming a mile off – and Newcastle were lucky to emerge with a point. 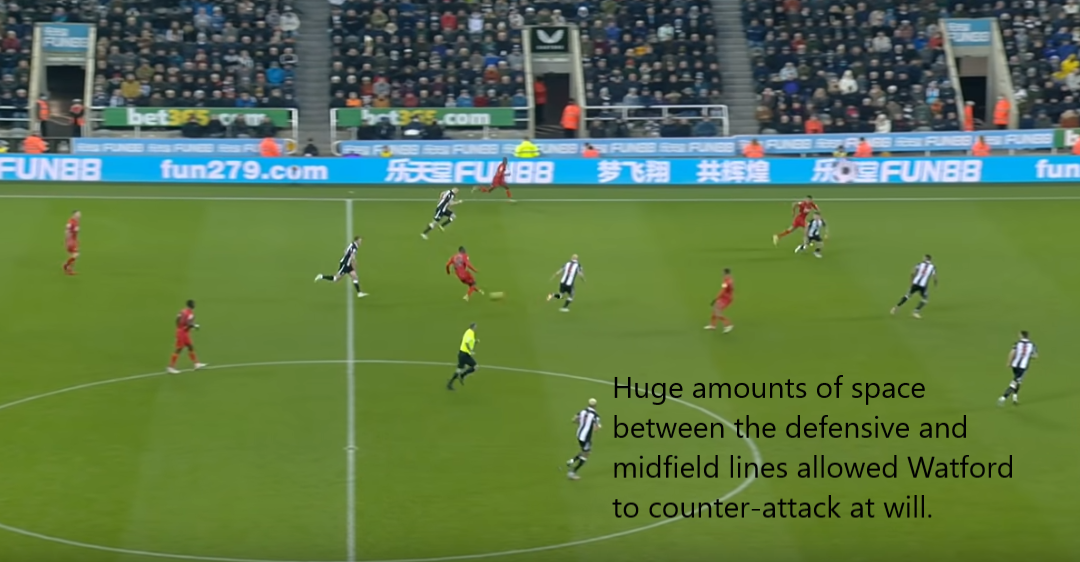 Rafael Benitez has been dismissed as Everton manager after a run of just one league win in the last 13 matches. The crisis at Everton goes much deeper than who is in the dugout, although hiring a Liverpool legend was always going to backfire – particularly considering Benitez’s tactical ideas are more than a decade out of date.

It is just not possible to play so defensively in the Premier League anymore, not with ambitions of a top ten finish. Everton consistently invite pressure with their low block, in turn breeding the sort of low self-esteem that leads to Michael Keane’s string of errors, culminating in a dreadful own goal against Norwich City on Saturday.

That defeat was always going to be the final straw. The main reason Norwich are in such trouble is that they play expansive, adventurous football without any bite, happy with pretty midfield patterns and hopelessly vulnerable to stronger and savvier teams. It is a damning indictment of Benitez’s tactical system that Norwich could play with such freedom, the hosts struggling to lay a glove on Dean Smith’s side as they passively sat back and waited to be beaten.

Everton have seen their director of football, head of medicine, and star left-back all leave the club recently after disputes with Benitez – only to sack the manager. It is that sort of appalling management from Farhad Moshiri, that tendency to give the manager absolute power only to lurch in a completely new tactical direction with each appointment, that has got Everton into such a mess.